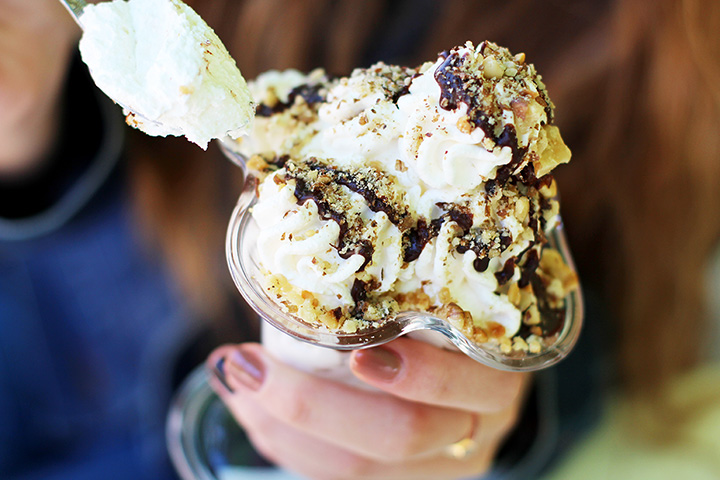 We take our frozen treats pretty seriously in Minnesota. No matter the time of year, nothing compares to a fresh scoop of ice cream. Fortunately for Minnesota natives or those visiting, we’ve got plenty of spots to enjoy this sweet dairy treat. From chocolate coconut delights to excellent Oreo-infused delicacies, Minnesota best ice cream parlors have it all. Here are our favorites!

Located where the Calhoun Isles, Lowry, and Wedge neighborhoods meet, the original Sebastian Joe’s shop has been an ice cream destination for decades. It now has a second location in Linden Hills and several outposts that sell its ice cream. The house-made flavors change all the time. So, you should always sample many of them. And then order the Oreo. Always order the Oreo.

You’re standing on the grass, eating a delicious malt next to a historic, brick building, watching sailboats scud over the surface of Lake Superior. You must be at PortLand Malt Shoppe. And if you’re looking for ice cream in Duluth, why wouldn’t you be?!

The folks who live near Grand Ave. in St. Paul knew about Grand Ole Creamery long before the rest of the world. But the cat (or cone) is out of the bag, now (Those darned “Best of…” lists!). So, if it’s a sunny day and you're having a hard time parking along the eastern stretches of Grand, you can bet it’s because ice cream lovers are lined up to get their fix.

Yes, we understand that frozen custard and ice cream are not the same thing. But you do not want to skip this place over a mere technicality. They serve cold, sweet treats in cones and dishes, so its close enough. Not only are Sydney’s flavors delicious, from a scenery perspective, it may just be the best place to munch a cone in Minnesota. It’s location on a narrow spit of land affords Lake Superior views on three sides, and sweeping Sawbill Mountain vistas on the other.

According to its founder, Flapdoodles is a place “where the only thing that makes sense is the ice cream.” As it turns out, their hand-crafted, gourmet flavors made a lot of sense to Rochester residents. Flapdoodles had to open a second shop to keep up with the demand. Not only do they serve generous scoops of house-made ice cream, they now offer specialty items like cakes.

A beloved Stillwater institution for nearly a century, Nelson’s Ice Cream has been putting smiles on the faces of locals and tourists, alike, since 1923. With more than 30 flavors to choose from—like Coconut Joy, which is coconut and chocolate perfection—you’re sure to find a scoop that will make you happy at Nelson’s.

Mom & Pop’s Ice Cream has dozens of rotating flavors on their roster, and that’s what keeps folks coming back for more. Beyond ice cream, Mom & Pop’s also offers up cookies, hot chocolate, and coffee—they’ve even worked with a supplier to create their own blend.

This South Minneapolis fixture has been serving award winning ice cream from its 34th and Lyndale location since 1950. Since it’s founder, Sonny Siron, was 100 percent Italian, it’s no wonder that the shop’s Spumoni is so beloved that its available in stores throughout the metro. Sonny’s many other flavors are no slouches, either.

It doesn’t have the most flavors and it’s not even open year-round, but there’s definitely something just right about grabbing a cone from the Boxcar and strolling around Canal Park. A Duluth favorite for years, Grandma’s Boxcar also serves up tasty hotdogs.