The 9 Best Museums in Minnesota! 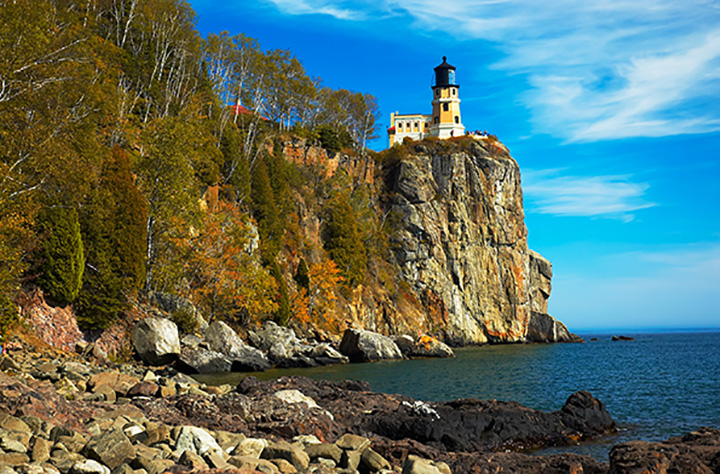 In culture-rich Minnesota, it's quite the challenge to narrow down a list of the 9 best museums in the state. World-famous venues like the Russian Art Museum in Minneapolis, the Judy Garland Museum in Grand Rapids, and the Marine Art Museum in Winona are a few fascinating museums that didn't make the list, further illustrating how difficult it is to choose just 9.

From modern masterpieces, to towering Tyrannosaurus, to man-made marvels, the 9 best museums in Minnesota have much to offer everyone.

The state's most complete art museum is the Minneapolis Institute of Art. Renowned for its Chinese collection, MIA offers a perspective on the breadth of art from prehistoric carvings to the latest in contemporary media. The museum's vast holdings include works by Rembrandt, Degas, Van Gogh, Monet, Cezanne, Magritte, Picasso and many others. Touring collections and special exhibitions are often in residence at the museum. If you're an art lover visiting the Twin Cities, MIA is not to be missed.

A couple hours north and west of Duluth, just south of Ely and within the boundaries of Minnesota's newest state park, the Soudan Underground Mine is a testament to human determination, particularly when it comes to extracting natural resources. A tour of the mine, one of the deepest in the country, reveals not only the history of iron ore mining in Minnesota but also some of the cutting-edge physics research being done today, almost half a mile beneath the Earth's surface. The University of Minnesota, along with the Fermi National Accelerator Laboratory and a handful of other organizations, runs a high energy physics lab. Tours of the mine and the labs are available for those who want to scratch their history and science itches at the same time.

Tucked into a bend in the Mississippi, the Science Museum of Minnesota is a riverfront homage to science that will wow adults and children, alike. With permanent installations that range from weather experiments to full-scale dinosaur skeletons to a trading post, where you can swap your own artifacts with others. A river-view mini-golf course offers summer entertainment, while the Omnitheater boasts a thrilling, large-scale film experience year-round. Touring exhibits, such as artifacts from the Titanic, NASA space expeditions and the Star Wars films regularly make their way through this museum.

Located on the University of Minnesota's Minneapolis campus, the Bell Museum of Natural History is as much an historic relic, itself, as it is a museum. Filled with taxidermy dioramas representing the state's flora and fauna, the Bell is the kind of museum that your parents and grandparents grew up with. Even so, the Bell offers hands-on experiences and interactive opportunities with naturalists and interpreters that bring its collections to life. The experience of seeing a museum that belongs in an exhibit on the history of museums makes visiting the Bell even more fun. But go there now! On Dec. 31, the museum is closing and reopening on the St. Paul campus in 2018.

Once a working beacon and now a museum operated by the Minnesota Historical Society, Split Rock Lighthouse on the North Shore of Lake Superior is, according to the Minnesota Department of Natural Resources, one of the most photographed lighthouses in the United States. Visitors to the site can tour the light keeper's house, other outbuildings and climb the steps of the lighthouse itself. On certain days of the year, including an annual commemoration of the sinking of lake boat Edmund Fitzgerald, the beacon is lit. The lighthouse site also offers an interpretive center and is surrounded by one of the North Shore's most scenic state parks.

The Walker Art Center and its adjacent Minneapolis Sculpture Garden, is a world-renowned museum of modern and contemporary art. The Walker is home to a rich collection of modern art that encompasses not only a retrospective of 20th and 21st century artists but often showcases new art in real-time by featuring performance pieces and video installations. Visitors to Minneapolis will likely recognize Oldenburg's outsized sculpture, Spoonbridge and Cherry, which has become an iconic symbol of the Minneapolis skyline, in the Walker's sculpture garden.

The Canal Park area of Duluth is a garden of delights for lovers of water and transportation. Home to one of the country's largest counter-weighted lift bridges, Canal Park and its museums showcase the engineering marvels that make the Great Lakes commercially viable. From a skyscraper-length, decommissioned lake boat that used to haul iron ore on the Great Lakes, the William A. Irvin to the Lake Superior Maritime Visitor Center, a joint effort of the Lake Superior Marine Museum Association and the U.S. Army Corps of Engineers, the museums in the Canal Park area offer a complete picture of the transportation and industry on the Great Lakes. A daily schedule of ship arrivals and departures is displayed on screens at the visitor center. The Lake Superior Rail Museum, which houses full-sized locomotives, and the Great Lakes Aquarium are also located within easy walking distance of Canal Park. These attractions round out the full view of Duluth's industrial history, offering perspectives on the railways that brought goods to the harbor and on the nature of Lake Superior, itself.

For history buffs and those wishing to explore the depths of Minnesota's rich past, there is no better place than the Minnesota History Center in downtown St. Paul. The Center boasts a deep collection of artifacts and displays that detail life in Minnesota, not just from past to present, but also from culture to culture. The museum's library offers archival documents that include primary sources on historic events, as well as well-known Minnesotans like F. Scott Fitzgerald. Special exhibits on subjects ranging from local sports history to Minnesota's "Greatest Generation" cycle through the center on a consistent basis.

Named after the founder of Minnesota-based biomed giant, Medtronic, the Bakken Museum provides a gateway for those with a passion for innovating in the fields of science, technology, and the humanities. All in the name of making the world a better place. The former mansion is located on Lake Calhoun's southwest shore in Minneapolis. Featuring a collection of celebrated artifacts, outstanding educational programs,  exhibits focused on the splendor of invention, science, technology, and plant medicine. Of course, let's not forget the Florence Bakken Medicinal Garden. Earl Bakken, the museum's founder, and namesake, notably invented the first wearable pacemaker powered solely by a battery, so his expertise in the subject matter is pretty solid.

2835 Abbey Plaza, Collegeville, MN
History: In 1965, Saint John's University took a bold and visionary step with the creation of a new library dedicated to the preservation of pric... Read More

2001 Highway 25 North, Buffalo, MN
The Wright County Historical Society is a non-profit corporation first organized in 1942 and reorganized in 1967. The museum, library and archives ... Read More

175 4th Street SW, Cokato, MN
About The Cokato Museum is an award-winning local history museum that focuses on the history of the city of Cokato and the surrounding townships i... Read More

The Charles A. Weyerhaeuser Memorial Museum

651 West Highway 12, Dassel, MN
History In 1985, when Burlington Northern decided to tear down the old depot in Cokato, MN., Howard Page (a Dassel businessman) purchased the b... Read More

20950 Rogers Drive, Rogers, MN
About Us: A stroll through the museum will take you on a nostalgic trip through the automotive past. Enjoy seeing 100 vehicles, including cars, tru... Read More

43411 Oodena Drive, Onamia, MN
The Mille Lacs Indian Museum and Trading Post includes a museum dedicated to telling the story of the Mille Lacs Band of Ojibwe and an adjacent res... Read More

37 Water Street, Excelsior, MN
The Museum of Lake Minnetonka, an all-volunteer museum, is in its 15th year of offering cruises to the public on its historic steamboat Minneh... Read More

Wings of the North Air Museum

3517 Raleigh Avenue, Saint Louis Park, MN
History:The Museum of Broadcasting is one of the best-kept secrets in the Twin Cities.  We have over 12,000 square feet of antique radios, tel... Read More

3537 Zenith Avenue South, Minneapolis, MN
About us:The Bakken Museum inspires a passion for innovation by exploring the potential for science, technology, and the humanities to make the wor... Read More

664-22nd Avenue Northeast, Minneapolis, MN
Mission: Dedicated to the memory of the late Captain Wilton Daniels of the Minneapolis Fire Department and his wife Bonnie who, through a generous ... Read More
Show More
Select a Minnesota town to find
the Best Things-To-Do and Places To Go around you