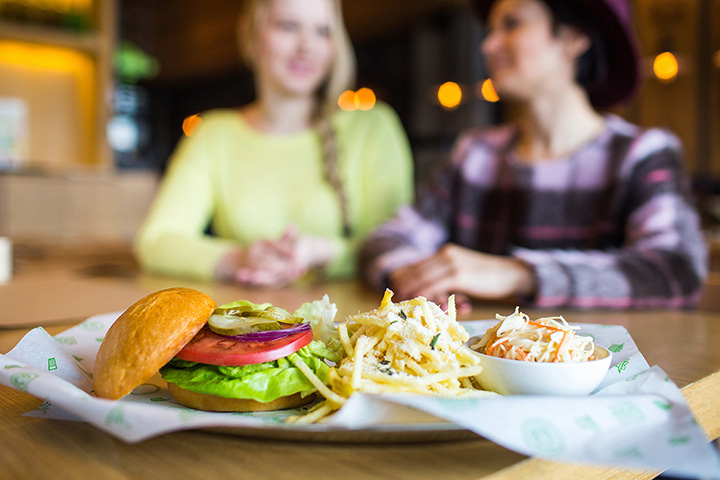 Studying all night can make a U student hungry. If you’re partway into an all-nighter and realize you’re ready for a snack, don’t fret—there are plenty of places around campus where you can grab a late-night nosh. Here are a few of our favorites.

It would be harder for you to find a time when the Hard Times Café is not open than a time when it is. This vegetarian/vegan restaurant is a West Bank institution that’s been feeding folks in the middle of the night since 1992. Whether you’re early to rise or late to bed, you can grab coffee or food at Hard Times, which is open from 5 a.m. to 3 a.m. (3:30 a.m. on weekends).

Now with two campus locations—the original in Dinkytown and a newer one in Stadium Village—Mesa Pizza can slam twice as many slices into the faces of famished freshmen (and anyone else who has a late night hankerin’). The Dinkytown location is open until midnight on Sundays, 2:30 a.m. Monday through Wednesday, and 3 a.m. Thursday through Saturday. The Stadium Village location is open until 10 p.m. Sunday through Thursday and 2 a.m. on Friday and Saturday.

Students on the St. Paul Campus can get a full menu of pub fare at Stout’s Pub on Larpenteur Avenue. They close at midnight on most nights and the kitchen is open until 11:30 p.m. So, whether you’re looking for wings, sliders, tacos, or of course, fish and chips, Stout’s Pub has got your late night hook-up.

If late-night studying gives you a sweet tooth, fear not. Insomnia Cookies’ Dinkytown location—the only one in the Twin Cities—serves warm cookies and cold ice cream until 3 a.m. every night of the week. If you’re to deep in your books to move, they’ll even deliver deliciousness to your door (or dorm, as the case may be).

Books and burritos are a cornerstone of campus life. It’s unlikely one could exist without the other. Students on the DInkytown side of campus can get their burrito fix at Burrito Loco Bar & Grill until 2 a.m. Sunday through Wednesday or until 3 a.m., Thursday through Saturday. They also serve bar apps until 10 p.m.

There’s something about Chinese food that makes it taste better late at night. And the Cantonese classics at Hong Kong Noodle in Stadium Village are no exception. Whether you’re looking for a dish of steaming lo mein or platter of Kung Pao chicken, you can get it until midnight at Hong Kong. They seasonally extend their hours until 2 a.m. in the spring.

The newest entrant to the campus late-night scene is one of the oldest restaurants in the area. For seven decades, Al’s Breakfast has been slinging coffee and eggs to sleepy students and professors, only to close in the early afternoon. Now, on weekends only, they’re opening the doors to nocturnal breakfast-seekers until 1 a.m. The late menu is still breakfast-centric, but is served in burrito form. They also added a hot dog to the late menu for folks who are craving one.

Another option for hungry students on the St. Paul campus is Station 280, a sports bar on Como Avenue that serves their full menu until 11 p.m. on Sunday through Thursday and until midnight on Fridays and Saturdays. They’re located about halfway between Dinkytown and the St. Paul campus, so students on the Minneapolis-side can pretty easily get over to Station 280 to catch a West Coast game, as well.