9 Best Places for Dessert in Minnesota 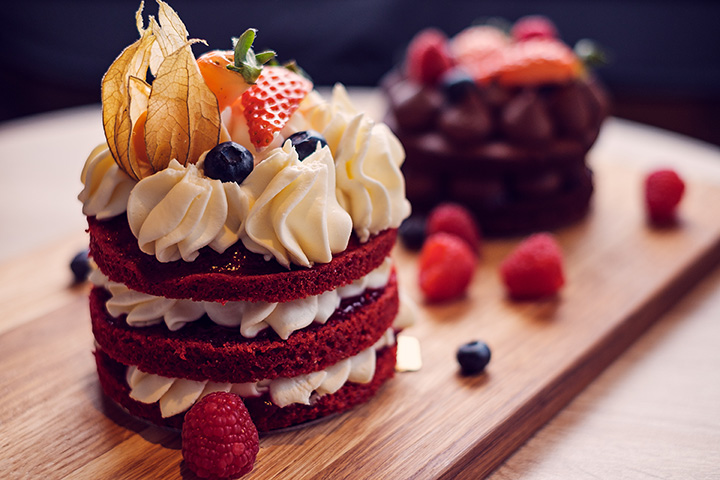 There is really no point in eating dinner (or breakfast or lunch) without dessert, is there? In fact, you could forgo the meal altogether and head straight for the sweets if you want. But no matter how you do it, you need to find a place to satiate your sweet tooth. There are far too many to choose from in the North Star State—but we’ll try. In no particular order, here are a few of our favorite places for dessert in Minnesota.

It’s almost impossible to have a discussion about food in Duluth without mentioning Duluth Grill, and dessert is no exception. People have literally driven hours just to eat the banana cream pie at Duluth Grill—and that’s not even our favorite dessert there! We would nudge you toward the red velvet cupcake or the blueberry pie made from blueberries grown right over there in Bayfield, Wisconsin.

It seems pretty clear from the name of the place that Edwards Dessert Kitchen is a destination for desserts in the Twin Cities. Renowned pastry chef Christine Kaelberer is the power behind Edwards, pushing out inspired sweets such as curried scotcheroos and mango coconut crème pie puffs.

A post shared by Edwards Dessert Kitchen (@edwardsdessertkitchen) on Dec 11, 2018 at 4:45pm PST

You can have a casual dinner at Café Latte or just pop in for dessert and coffee after dinner elsewhere, but dessert at Café Latter is the point (as it always should be). They always have an incredible selection of scrumptious sweets, but you would be hard-pressed to find a better German chocolate cake anywhere in the world (including Germany).

Va Bene Caffe not only has a sweet view of Lake Superior, it’s also delights with its downright decadent desserts. All of their desserts rotate and are daily from scratch and on the premises. If the daily dessert selections don’t do it for you, you can always choose from the dozen daily flavors of artisan gelato and sorbettos.

Hola Arepa specializes in flavors from the Caribbean coast of South America. So, many of their desserts have a light, breezy finish to them—refreshing after a couple of shredded beef-and-plantain arepas. Definitely go for the passion fruit flan or the horchata pot de crème.

Bellecour is award-winning chef Gavin Kaysen’s riff on a French bistro and bakery. Given the strong dessert game at sister restaurant Spoon and Stable, it’s really no surprise that Bellecour hits the sweet spot. The vacherin, with apple confit and lemon curd, and profiteroles are quite sublime.

Saint Dinette is known for its exceptional, yet playful, food (There’s a fried bologna sandwich with American cheese and pickles next to the Spanish-inspired octopus plate on the menu). Dessert is no exception. We recommend the semi-savory éclair, with foie gras and salted caramel, or the flapjacks with chômeur sauce and vanilla butter.

It must be the long winters that make Minnesotans crave tropical flavors—but regardless of the reason, folks in Rochester flock to Chester’s Kitchen and Bar where the banana cream pie is a perennial favorite on best-of lists. If banana is not your favorite flavor, fret not: They also have a fantastic old-fashioned chocolate cake and a beautiful bread pudding on the menu.

If you’re having lunch, a late lunch or need to pick up a dessert for later, Patisserie 46—the immensely popular French bakery—is an excellent choice for dessert. The award-winning, nationally-renowned bakery always has a case of meticulously-crafted, delicious delights awaiting your sweet tooth.