The 9 Best Burgers in Minnesota! 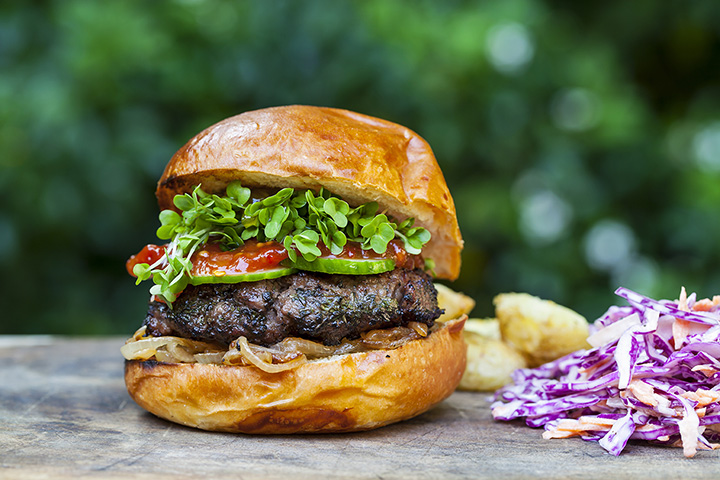 Minnesotans love a good burger. But when you talk about burgers in Minnesota, you cannot avoid a discussion of the “Jucy Lucy”—a cheese-infused burger so contentious that folks will leave the room if you declare the wrong joint your favorite. Minnesota’s Lucys have been consumed by presidents, featured on national television, and have been lauded in song. Whether you love the standard patty (or two) on a bun or a hot cheese injection, here are our favorites places to grab a burger in the North Star State.

Claiming the “original” Jucy—that’s right, no “I”—Lucy, Matt’s Bar & Grill is an example of specialization breeding excellence. For decades, cooks at Matt’s have been grilling Jucy Lucys in the same way, in the same style, on the same grill: American cheese melted inside a patty, and, if ordered correctly, topped with grilled onions. Sonny Knight (and the Lakers), in his song “Juicy Lucy,” says he “met her… at Matt’s.” And if you’re a Lucy rookie, Matt’s is a fine place to make the introduction. Remember, that molten-cheese-burn on the roof of your mouth is a badge of honor.

If you ask about burgers in St. Paul, you’ll ultimately be steered toward the nook, where the capitol city’s most popular version of the Lucy resides: The Juicy Nookie. Hometown baseball hero Paul Molitor and Food Network’s Guy Fieri both have signature Lucys on the Nook’s menu. In spite of a fire that precipitated a shutdown and changes in ownership over its 80-plus-year history, the Nook persists as St. Paul’s most beloved burger joint.

It’s a pretty, 45-minute drive from Minneapolis to get to the Brookside Bar and Grill in this small, St. Croix River village. And the trek is totally worth it. Not only do they serve up a few signature burgers, Brookside also offers a couple of savory beef alternatives, black bean and turkey-avocado burgers, as well as a build-your-own option with more than 20 toppings to choose from.

Almost universally-acknowledged as the “Best Burger in the Northland” (Duluth News Tribune), Big Daddy’s burger menu puts most others to shame. This Duluth joint boasts well over a dozen signature sandwiches, from the breakfast burger to the cream cheese and bacon burger. Ray’s Smother Melt, a savory, Southwestern take on a traditional patty melt, will leave you smiling and in need of a nap.

By no means is BLVD a “burger joint.” One of its burgers, however, is so outstanding that it must be included here: The BLVD Royale with Cheese (yes, as in “Pulp Fiction”). Two patties, melted cheese, crisp pickles, carmelized AND crispy onions, all on a pretzel bun make it worth a drive to the suburbs. Stop in during happy hour and order a Mini-Royale, which comes with fries for only $6 (order two if you’re really hungry).

Folks from all over the state make the truck to the tiny bluff town of Miesville, between Hastings and Red Wing to watch their minor league baseball team, the Mudhens, play under the small-town lights. An inevitable part of this ritual is a burger from King’s. The juicy, perfectly-grilled burgers are made to order, layered  with fresh toppings, and enhanced by the echoy voice of the PA announcing hitters and the “chock” of balls off of bats.

Now with a few Rochester locations, Newt’s owns the city’s burger dynasty, having won “best burger” accolades almost-annually since 2003. And rightfully so. Newt’s big, juicy burgers are hand-patted and served with your choice of several toppings. It's hard to go wrong with the spicy Dave’s Burger at Newt’s.

This casual, local watering hole became a destination when word spread about its burgers. The Lions Tap doesn’t do anything too fancy with the burger concept, but its house-blend spices do so much to enhance the flavor of the patty that you can pretty much eat it plain. The mushroom and Swiss burger feels like a steakhouse experience.

Here’s the thing, Twin Citians are so entrenched in their love of Lucys (jucy, juicy, or otherwise) that if we failed to include the 5-8 Club on a list that also includes Matt’s, we’d be in big trouble. So, it’s only appropriate that the 5-8 Club bookends this list like the two bars bookend Cedar Ave. in Minneapolis. Unlike its up-the-street rival, the 5-8 Club offers its Juicy Lucys with a variety of cheeses and toppings. Try one with blue cheese for a tangy twist on the Lucy legend.